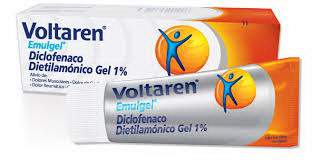 The main active ingredient of Voltaren gel is diclofenac. Diclofenac is a nonsteroidal anti-inflammatory drug, a derivative of phenylacetic acid, which has an anti-inflammatory, analgesic and antipyretic effect.

Besides, the aqueous-alcoholic basis of Voltaren gel has cooling and some analgesic effect in a place of administration.

Voltaren emulgel is poorly absorbed into the general bloodstream in case of topical administration. Usually, the adsorption rate does not exceed 6%. The total quantity of diclofenac in blood is proportional to the area of the drug's application. You can increase the gel absorption rate by 3 times if it is used with an occlusive dressing.

Diclofenac has a tight connection with plasma proteins, mainly albumin (extent of binding reaches 99%) after the drug penetrates bloodstream.

In case of topical administration, Diclofenac concentration in synovial fluid is much higher, than in blood plasma. Metabolites of diclofenac are much less active than diclofenac itself. The elimination half-life of the drug is 1-3 hours. It is removed with urine and through bile together with feces.

Voltaren gel is developed and produced by the Swiss company of NOVARTIS CONSUMER HEALTH, S.A. The main feature of Voltaren gel is its innovation form. Unlike single component creams and gels, Voltaren combines lipophilic and hydrophilic basis. The lipophilic basis is an emulsion, it includes fatty components, which promote fast and almost full Diclofenac absorption from the skin surface. The hydrophilic basis is a gel, which includes water components. It has provided topical cooling and analgesic effect. Thanks to the aqueous-alcoholic component, containing in hydrophilic basis, the drug is quickly absorbed by the skin and has an analgesic effect. After alcohol evaporation, Diclofenac concentrates on fatty micelles, which facilitates its penetration to the center of pain and inflammation.

The combination of lipophilic and hydrophilic bases in one drug promotes good penetration of Diclofenac into deep layers of tissue and directly to a pain source. It easily passes physiological barriers (epidermis, muscles) and concentrates in synovial membrane and in synovial tissue. Namely, in target tissues in case of locomotor system pathology.

Voltaren gel is absorbed 3 times quicker from skin surface in comparison with other gels and starts working in just a few minutes.

When should I use Voltaren Gel?

The drug is intended for topical administration in the following cases:

How should I use Voltaren Gel? 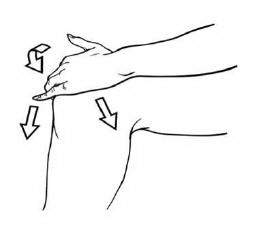 The drug is used for adults and children over 12 years. Voltaren emulgel is applied to the clean dry skin.

Use Voltaren gel 3-4 times a day to achieve the best efficiency. Apply emulgel on the skin over the affected joints, inflamed soft tissues or muscles in pain. The amount of the drug may vary approximately from 2 to 4 g. and depends on the size of a painful zone. 1 g of gel corresponds to about 2 cm of the squeezed-out gel strip. Rub the gel after application and mass the place slightly for its best penetration.

Wash your hands before and after using the drug. Try to avoid getting the gel into your eyes.

Report to your doctor if there is no positive dynamics of treatment is observed after one week of using Voltaren gel.

There is no need to adjust the drug dosages for people of 60 years and older.

Keep in mind, that the effect of using of Voltaren gel depends on a proximity of injured tissues to a place of its application. In case of injury of soft tissues located close to the skin, the positive effect comes quickly (in several hours). In case of rheumatological diseases, when the drug has to penetrate deeply into tissues, the effect is usually observed in 3-7 day after continuous use.

What are Voltaren gel side effects?

Due to the low absorption rate of Diclofenac into the bloodstream, the risk of side effects development is small. However, such adverse reactions as bronchospasm and allergic reaction, are extremely rare possible.

Most common allergic reactions after using of Diclofenac are skin itch, hives, allergic dermatitis. Angioedema and photosensitization are also possible in rare cases.

Contact your doctor if you experience some of the side effects listed above.

Avoid using Voltaren gel if you have:

Do not use Voltaren gel for children till 12 years old.

Women on the first and the second trimester of pregnancy, as well as people of advanced age, should also use Voltaren gel with caution.

May I use Voltaren gel during pregnancy?

Use Voltaren gel in the first and second trimester of pregnancy, if the expected advantage for a mother is higher than potential risks for a fetus.

Avoid using Voltaren gel is the third trimester of pregnancy, as Diclofenac is able to penetrate through the placental barrier and may cause damage to the development of the cardiovascular system in a fetus.

Due to the lack of data about the release of Diclofenac with breast milk, is not recommended to use the drug during breastfeeding. Nevertheless, if the drug is used during breastfeeding, avoid applying it on mammary glands, on large surfaces of skin and do not use it for a long time.

Use Voltaren gel with caution together with other nonsteroidal anti-inflammatory drugs. Carefully adjust and calculate dosages of all drugs.

Due to the low absorption rate, the interaction of Voltaren gel with other medicines is not revealed.

An overdose with Voltaren gel is improbable if it is used according to the instruction.

However, if you use 100g of gel or more, which is equivalent to 1000 mg of diclofenac, the emergence of undesirable reactions similar to side effects, is possible.

Contact your healthcare provider, if you think you've applied too much of Voltaren Gel.

The drug is recommended to be stored in a dry place at room temperature.

Apply Voltaren gel only on unimpaired skin, avoiding it to get into open wounds. Use occlusive dressing after applying the gel on a body.

Avoid gel to get into your eyes and on mucous membranes.

Using Voltaren gel does not influence the ability to drive a care and to work with machinery equipment.

Where can I buy Voltaren gel over the counter?

You can buy Voltaren gel online without prescription or over the counter in your local pharmacy. It would be also wise to save some money and purchase generic Voltaren gel online, which is a cheap analog of the brand medicine. It is easy to get Voltaren gel with overnight delivery from an online pharmacy.